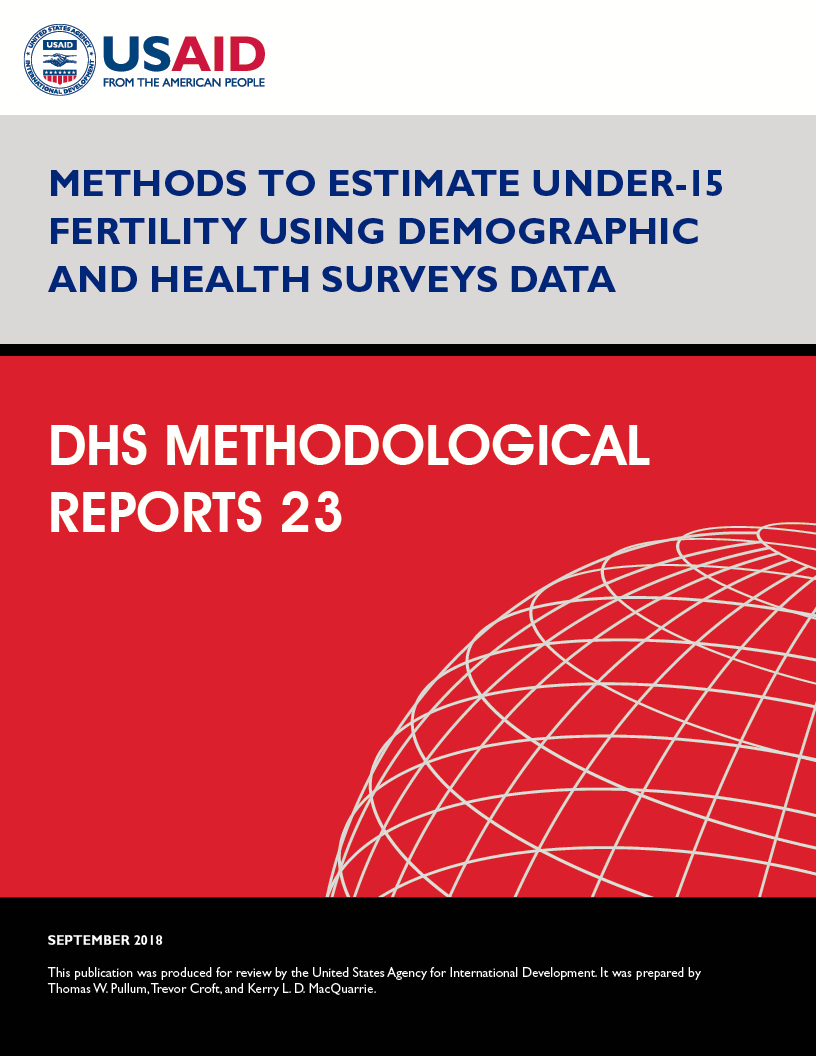 Early childbearing carries serious risks to the health of both the child and the mother. International guidelines classify births before age 18 as high-risk births, and births before age 15 are of even greater concern. Early marriage and pregnancy are also interpreted as negative indicators of child protection, and may severely limit an adolescent girl’s educational opportunities. DHS surveys are a major source of fertility estimates for age 15-49, the age range of eligibility for the women’s interview and the collection of birth histories. Until recently, DHS surveys were not used for the calculation of fertility rates below age 15. This methodological report provides technical details for calculating fertility rates for age 12-14 and age 10-14 during the 3 years before the survey, and age 10-14 during the 5 years before the survey, the standard time intervals for DHS age-specific fertility rates. The under-15 births, which go into the numerator of the fertility rates, are obtained from the birth histories of women age 15-19 at the time of the survey. The central question is how to deal with the left censoring of under-15 exposure, which goes into the denominator of fertility rates, but is truncated because girls under age 15 are not included in the surveys. To deal with censoring, rates for single years of age 10, 11, 12, 13, and 14 are constructed. DHS does not normally construct single-year rates, but they are of special interest below age 15 and convenient for calculating 3-year and 5-year rates. Single-year rates are only slightly affected by censoring. For example, the mean age observed for age 14 in the past 3 years is only about 12 days higher than 14.5. Pooled rates for age 12-14 or 10-14 are constructed as weighted averages of the single-year rates. Three alternative weighting methods are considered. The first uses information about girls age 10-14, who are included in the household survey but not in the women’s survey. The second uses weights derived from the geometry of a Lexis diagram. These estimates are easier to calculate and are the ones currently available on STATcompiler. The third method is simply the arithmetic average of the single-year rates. These estimates are the easiest to calculate but lack a demographic rationale. The second and third methods, when relevant, also assume that 60% of the total exposure to age 10-14 is to age 12-14. This report applies the alternative approaches to 67 DHS surveys conducted between 2001 and 2016. The three estimates are virtually indistinguishable in almost all surveys. When they differ, the main reasons appear to be that the assumption of 60% is not valid and/or there are irregularities in the reported age distribution that are probably traceable to digit preference or age displacement across the age 15 boundary or potential age displacement related to having an early birth. The first method, which makes the most use of the available data, is most sensitive to data quality. The third method, which makes the least use of available data, is least sensitive to data quality. The report describes simulations of the effect of reducing the minimum age for eligibility from 15 to 14, or to 13, in terms of the expected additional number of under-15 births and the expected improvement in the precision of the estimated rate. The gain from lowering the age range of eligibility below age 15 would be surprisingly small. Most under-15 fertility occurs at age 14, and the birth histories of women 15-19 provide nearly complete information on births at age 14.