What are the DHS indicators related to infant and child mortality?

Why is child mortality important?

Under-5 mortality rate is a leading indicator of the level of child health and overall development in countries.

Millennium Development Goal #4 is to reduce by two thirds, between 1990 and 2015, the mortality rate of children under five. Between 1990 and 2008, the number of children in developing countries who died before they reached the age of five dropped from 100 to 72 deaths per 1,000 live births.

Photo credit: © 2009 Arie Basuki, Courtesy of Photoshare. A mother kisses her child after being treated at a health post for an acute upper respiratory tract infection (ARI) in Pangalengan, Bandung, West Java, Indonesia. 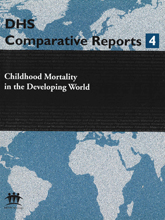 Infant and child mortality data are available on STATcompiler; compare among countries and analyze trends over time.